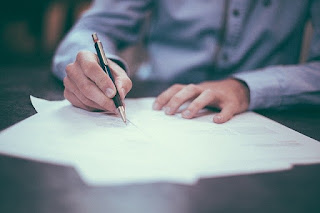 Lorie knocked on the door and entered his office. Her boss was sitting at his desk and looked up from his work. Her heart skipped a beat. As he sat back in his chair, his lips curled into a slow smile.
"Lorie, you've been quite distracted lately. Why is that?"
She swallowed and stared at her feet, flustered.
"I - I'm sorry, Sir. I promise it won't happen again."
"That's not what I asked you, Lorie."
His dark voice gave her the shivers. Fudge, she swore silently, why can't he just not notice me, like everybody else.
"I'm waiting for your answer."
After a couple of seconds of silence, he crooked a finger at her.
"Sit down. Talk to me.
Her shoulders sagged with the knowledge he wouldn't let her go without an explanation and sat down. He studied her closely, making her squirm.
"I'd rather not talk about it, Sir"
"That's not an option, because it effects your work. I've been watching you closely, Lorie. In a matter of weeks, you've gone from working with intense concentration to being in a state of distinct distraction. Why is that?"
"It's private."
"Start talking."
Wringing her hands she tried to gather up all her strength to refuse his order. She really didn't want to talk about it. She couldn't.
"No," she whispered. A quick peek at him showed his surprise. He raised a single brow. He stood and walked around the desk.
Breathe in, breathe out, don't look at him, don't talk, she kept repeating in her mind. A pair of legs came into her line of sight. Fine legs, perfectly molded in black slacks.
With a single finger he tipped her chin up and her heart went into overdrive.
Fudge.
Nope, she chastised herself, this is not logical. It's just an innocent infatuation, not real. He has no power over you. Repeat after me, he has no power over you.
"Look at me, Lorie." The timbre of his voice made her insides quiver. Not good, not good at all.
"Your anxiety levels are through the roof. I don't know what caused this and I do need to know, but for now I'll let it go. "
He tilted his head, his grey eyes locking with hers, searching for answers.

"Some people thrive on freedom, others thrive under control."

Popular posts from this blog

May 24, 2019
we hadden geen geld, geen knikkers jij & ik we speelden met zand met onze handen bouwden wij de mooiste kastelen we had no money, no marbles you & I we played with sand with our hands we built the most beautiful castles
4 comments
Read more
September 09, 2021
green leaves change colour
Post a Comment
Read more